from the Bracebridge Gazette, 7 August 1947

Mr. Beley was the first white child born in Humphrey Township. When he wrote this article, he was serving as a councillor for Humphrey Township where he'd long been prominent in municipal affairs.

The late Edward Clifford was the first settler in the Township of Humphrey and with his partner Albert Williams, an old trapper known as "British Bill", at one time owned most of the village of Helmsley, now the village of Rosseau. Clifford located Lot 72, Conc."A" and William Lot 73, Conc. "A" and Lot 4 Conc. 6 on which my home named Ferncliffe is now.

They came by boat from Collingwood to Parry Sound, then walked through a bush trail to Ashdown Corners where the Siretts were kind enough to let them live in their small shanty until my father was able to build a house on his own land, near the second bridge on White Oak Creek, now called Shadow River.

That fall, William Stoneman came out from England and his brother Charles followed him the next spring; they located at Turtle Lake, where the best farms in the township are today. The Ross family came soon after and settled on the other side of Turtle Lake.

The Ashdowns came in the spring of 1868 and bought a small piece of land from my father and built a store where the Nipissing Road and Parry Sound Road cross, afterwards known as Ashdown Corners, where they did a good and successful business for many years until their health failed; they also built a hotel.

The Ditchburns came in 1869 and lived in a small shanty at Cameron's Bay, where the Nipissing Road starts on Rosseau Lake, their first winter.

About this time a great number of settlers came and all were good people and real neighbours: the Morgans, Slades, Knights, McCauleys, Meisenheimers, Lorimers, Kirkmans, Greggs, Scotts, Phillips, McCans, Harts, Draycotts, Martins, Huttons, McGarys, Shuttleworths, Symingtons, Cavanaghs, Lawsons and many others of whom I cannot think just now.

Now for a few words about the tourist business. Sometime in 1869, an American named W.H. Pratt came and bought several village lots, and on the 19th of May, 1870, had a raising to start building the first summer hotel on the Muskoka Lakes which he named the Rosseau House and which was built on Lot 15 Ash Street East. This hotel was opened for business on July 1st the same year The late Judge and Mrs. Maclennan of Murray Street, Toronto were the first guests.

Mr. Pratt kept building and improving his business and built two large wings to the hotel about three years before it was destroyed by fire on October 6th, 1885. Mr. Pratt was a wonderful hotelkeeper and Mrs. Pratt was a splendid hostess and housekeeper, a perfect lady. The Pratts certainly started the tourist business in Muskoka. Their rates were from $2 to $5 per day and when the hotel was destroyed by fire there were 40 guests in the house of whom half were from the southern States. The Rosseau House and Shadow River were known in London, England in those days.

Now for a bit about lumbering. When I was a boy I have seen White Oak Creek full of board timber from the lake for two miles up, without a knot or shake in any of the pieces, all of virgin pine.

I have also taken out some good trees myself. One straight pine with nine logs in it scaled 5,755 feet in the tree. A few years ago, a white oak tree was cut on Lot 5 in the 7th Concession which scaled 2,150 feet. In 1881, my father sold some splendid white oak trees for $2 each to the late A.P. Cockburn who built the steamer Kenozha with the timber. Lots of these trees were 60 feet without a limb or flaw.

In the summer of 1868, there was not a tree cut on the lake except a camp site on Yaho Island where the late Professor Campbell afterwards built his summer home. Soon after this, Hamilton Fraser settled at the head of the lake and finally built the Summit House, where he, and his son Alex after him, did a splendid summer business until the house was destroyed by fire some years ago. The late Dr. Walton settled near Fraser, but afterwards moved to Parry Sound.

I consider Humphrey the best township in Parry Sound District. It may interest and surprise some of you to know that it was formerly in Muskoka but the early settlers managed to get that changed as Parry Sound was nearer than Bracebridge, which made a big difference.

This article appeared in the April 1988 newsletter, Volume 4 - Number 1 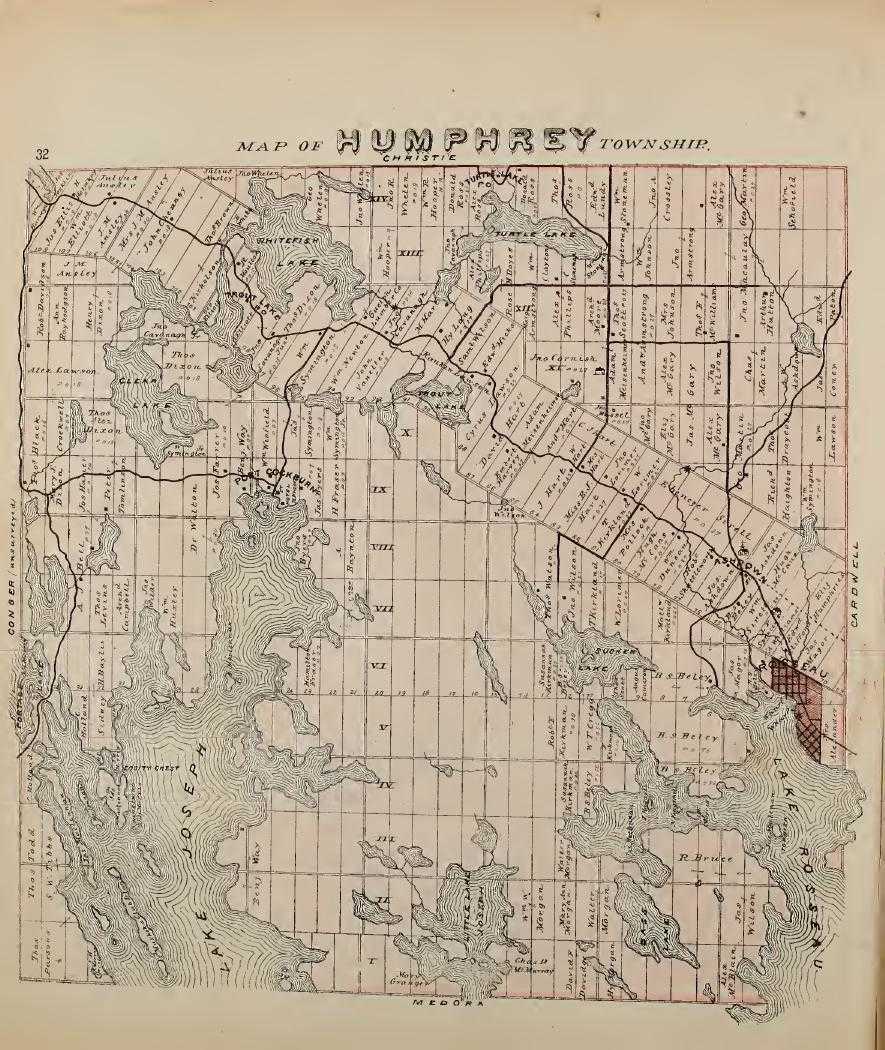