In an effort to populate the province, the government of Ontario passed The Free Grants and Homestead Act" in 1868. Along with the settlers the lumbermen, with their eyes on the profit potential of all those trees, soon converged on Parry Sound District. Christie Township was surveyed by John Grant in 1869 and named for Robert Christie, M.P.P.. a member of Ontario's first Legislative Assembly.

Christie was settled from it's borders inward beginning in 1870. We find that most of the new arrivals poured in from Humphrey Township, suggesting they used the Parry Sound Road, linking Bracebridge, Rosseau and Parry Sound. It had been built between 1863 and 1867.

At the same time, settlers entered Christie from McKellar to the north and from Foley to the west. Foley had opened for settlement some years earlier and a rough road already headed toward Christie. There was little settlement to the east although interest was shown in the lots for timber.

The earliest town site started to develop at Edgington, by the narrows at Duck and Maple Lake. John Edgington arrived in 1878 and settled at the narrows. He immediately built his home and a store with a post office. A shoemaker by trade he had a great deal of business making boots for the loggers. His supplies for the store came from Rosseau. John died in 1900 and the house burned soon after. By this time the settlement of what would become the village of Orrville had started and the need for a store at the narrows no longer existed.

By 1892 it was evident that the partially built Parry Sound Colonization Railway line linking Parry Sound with the existing line through Bracebridge to North Bay would bypass Edgington. Later in 1892 the Parry Sound Colonization Railway was purchased by John R. Booth owner of Ottawa Arnprior and Parry Sound Railway and become a link between Ottawa and Parry Sound. Samuel Armstrong, director and stockholder of the railway had a town site surveyed and built a very small store at what became the village of Armstrong. The post office was moved form John Edgington's store to John Orr's hotel in Armstrong and was named the Orrville post office. The station when it was built in Armstrong was named the Edgington Station. The address of a resident may have read "Orrville P.O., Edgington Station, Village of Armstrong.

The railway was the lifeline of the township, at least while the white pine lasted. Besides Orrville, the settlement at Beatty's Siding to the west was to service the railroad. The settlement at Maple Lake was strengthened by the presence of the Long Lake Lumber Company and the coming of the railway (1894).

At the extreme north west corner of the township lies Carlyle Lake named after Albert Carlyle who homesteaded Lots 29 & 26 Concession 14. About 4 or 5 families attempted to begin a settlement in this region but it petered out. Farmers in Christie Township have always been a hardy lot. The township features a string of adjoining lakes flowing from south to north through its centre. The best agricultural land lies near this chain.

This very brief history is from 'Meanderings and Memories". Christie Township 1894 & 1994. Researched and compiled by the Christie Historical Committee. 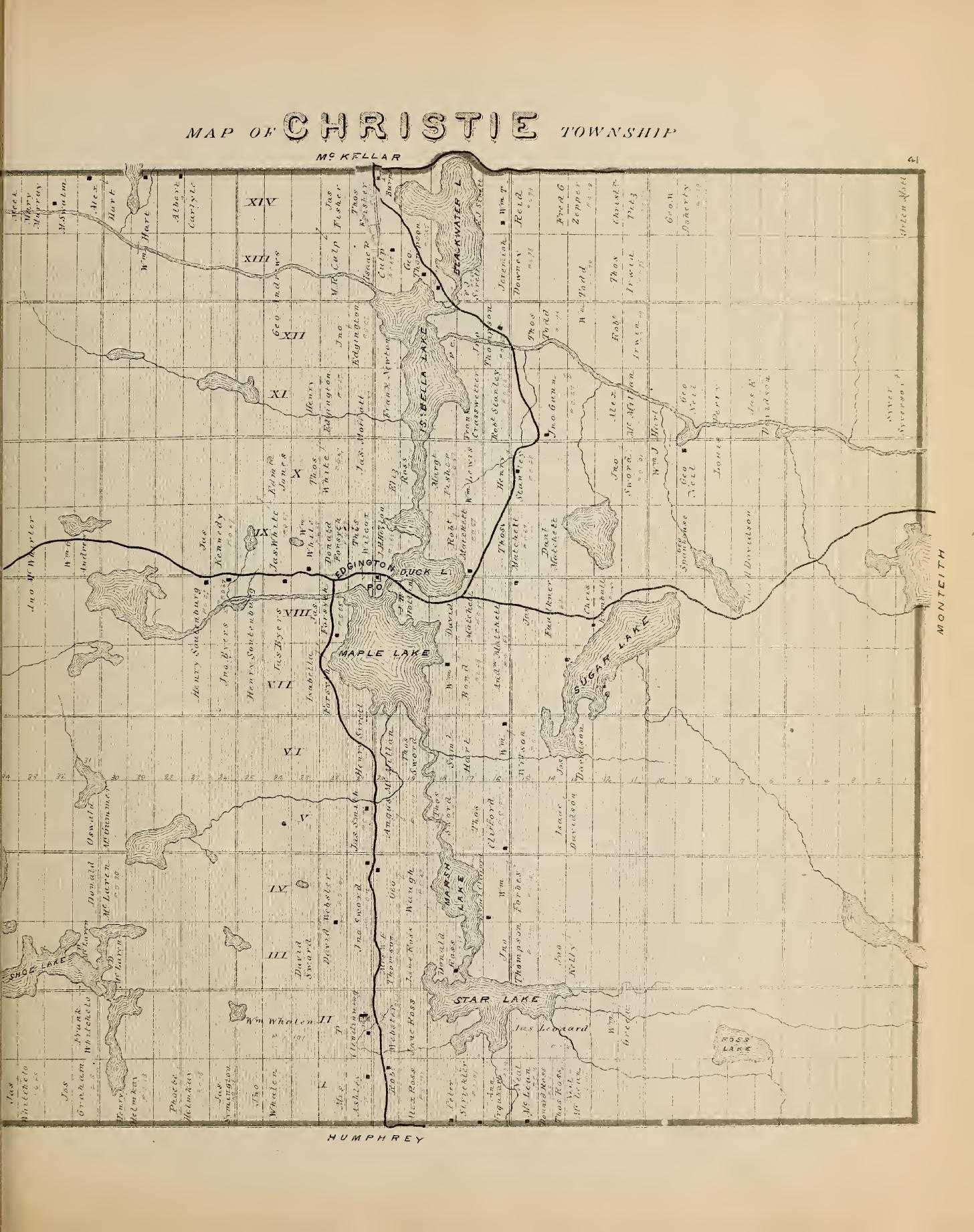