In the early 1800s people started moving north from the more settled parts of the province. They were enticed into this unpopulated area by the offer of free grants of land. The first white man to locate in the township was a trapper by the name of Peter Leach. David Patterson came next. He built a little shanty by the rapids on the shores of McKellar Lake.

The road from Parry Sound to the rapids was blazed by Samuel Armstrong, John McKeown and Andrew Moore. They decided this would be an ideal spot for a settlement. The wagon road, called the Great North Road, was built soon after. William Beatty was awarded the contract. It was a twisty road which is said to have followed an old Indian trail. Beatty undertook to complete this road between April and November 1867 at a cost of $4275.

J.W. Fitzgerald surveyed McKellar Township in 1868 & 69. The township is named after the Honourable Archibald McKellar who held office in the first legislative assembly of Ontario from 1867 to 1875. Thomas McMurray, who served as land agent for Parry Sound, reported to the Honourable A. McKellar on immigration.

The township contained 44,755 acres. Of this, 40% was reported to be good land, and there were excellent stands of oak along the Manitawaba shores. Samuel Armstrong built a mill and shipped sawn planks to Parry Sound by oxen and wagon.

In 1872, a year before the township was incorporated, the first division court sat at Armstrongs store with Judge McCurry presiding. There was only one case on the docket. Henry Armstrong acted as clerk and William J. Mof fat as bailiff. If the docket showed a clean sheet, the judge received the customary white gloves.

McKellar Township was incorporated in the spring of 1873 under a special act of the Ontario Legislature granting Municipal Institution in unorganized districts without connection with any County Council. Samuel Armstrong was appointed Reeve. He held this position until 1886. The first councillors were William Hurd, G.E. Lee, James McKeown and Samuel Oldfield. They received $11 a sitting and 5 cents per mile each way to the meetings. Willian Nixon acted as clerk at this first meeting. The second meeting was on 27 May 1873. David Patterson was elected clerk at a salary of $29 a year, and Charles Hoskins was assessor and collector at $25 per year.

The new council established roads and appointed path masters. A bonus was granted to anyone who would erect a grist mill. School sections were defined and numbered,. and assessments levied. In 1874 the tax returns were $197.25 for township tax and $226.74 for school tax.

In 1870 a church was built on the hill where it still stands today. There was a store and post office in Samuel Armstrong's house. When Henry Moffat Sr. built on the far side of the rapids, the post office was moved over there. In the spring of 1872, Mrs. Charles Brown held school in her kitchen. McKellar Loyal Orange Lodge 546 was organized on September 28th, 1870. At one time there were over 90 members. 1872 also saw the opening of a boarding house by Samuel Armstrong. In early 1874, the McKellar House was completed. This was managed by William F. Thompson. At the council meeting on September 9, 1873, a tavern licence was issued. This cost $30 per year. Henry Watkins was appointed tavern inspector.

In 1878, 160 ratepayers were noted for the township. McKellar village was surveyed into village lots and the streets were given names. The village had two stores, a hotel, a temperance boarding house, a wagon shop, grist mill, sawmill, blacksmith shop, and two boot and shoe makers. There was a Methodist Church, Orange Hall, schoolhouse and post office. In 1880 a woollen and carding mill was erected. Shorly after, a cheese factory was also built

The first fall fair was held in the village square in 1875. The exhibits were over Armstrong's store. It was not until 1893 that an agricultural hall was built.

It was a rainy December 4th, 1920 that the first meeting of the telephone commission was held. William F.Tait acted as president with Rev. Albert Bushell as secretary. After much planning and work the phones were ringing in late 1921.

By 1888 there were 172 resident ratepayers. McKellar township has been steadily growing and in 1987 has approximately 1800 ratepayers. Our paved Highway 124 is a big improvement over the twisty trail on which the oxen plodded to reach the virgin forest so many years ago.

This article first appeared in the April 1987 newsletter, Volume 3 - Number 1 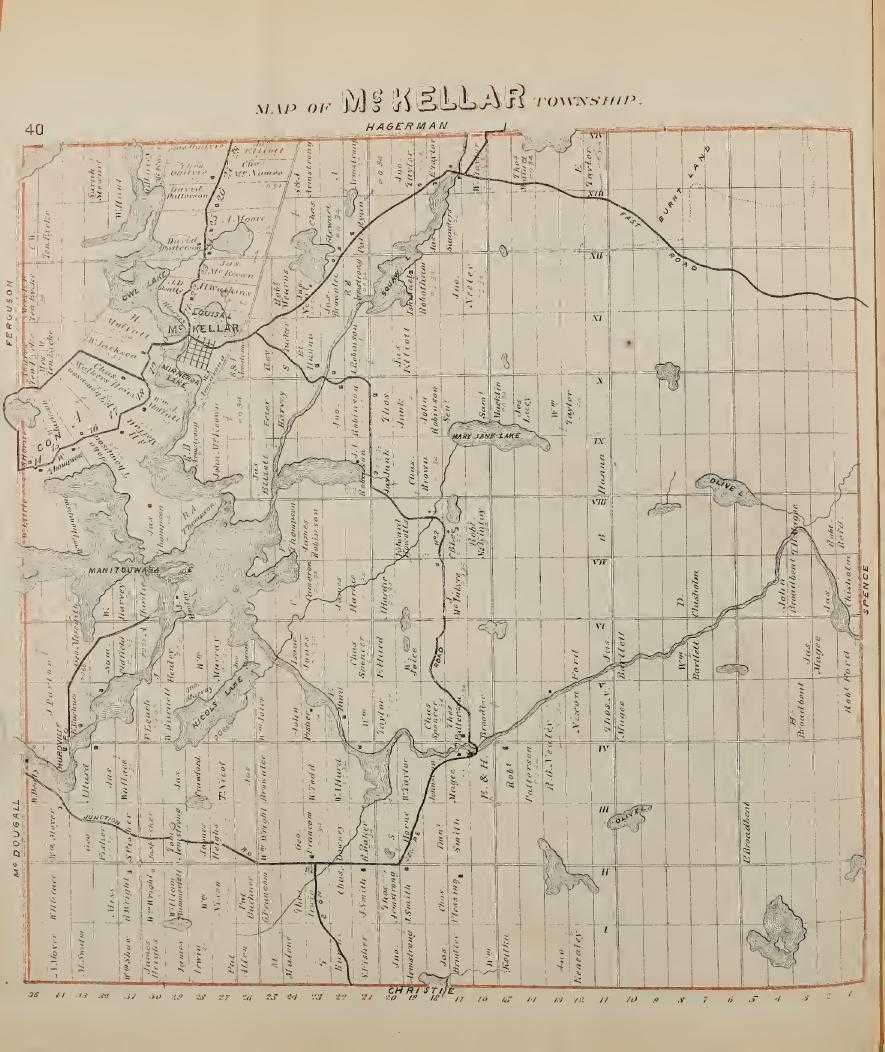